The Other Surf Guitar

Not much is often said in the Surf Music world about the Rhythm Guitar in general these days. There are actually more Surf Trio's today than there have ever been to my knowledge, and the trend shows no sign of stopping. I mean really, the rhythm guitar is turned down so much in a lot of the first wave recordings that you can barely make it out over the sound of the piano or drums, or even sometimes the bass itself! It seems like it dwindles in the background providing some type of moral support, but not really coming out of the shadows of the mixes except for brief moments that are hard for the novice listener to pick out. In my opinion, this may be why the rhythm playing in Surf Music today seems to be a very overlooked, if not downright disregarded, art form.

Who cares about the Rhythm Guitar?

If you're a rhythm guitarist you have undoubtedly felt like you are in the background and very far from the spotlight at times. Somewhat akin to playing the Cowbell in "Don't Fear the Reverb", except you don't have your own skit on Saturday Night Live yet, and probably never will. In my years of playing in a Surf Band, I've played Rhythm Guitar quite a lot. I have also played a lot of Lead Guitar, and one of my favorite aspects of Surf Music, is the ability of the 2 Guitarists to play off of each other and trade up who is playing lead and who is playing rhythm at any given time. In Surf Music we have to be more creative than other non-instrumental genres, because we don't have a singer, and as a lead guitar player we don't have the opportunity to "Vamp" all that often (like a good amount of Heavy Metal guitarists get to do during the Verse). So we have to get inventive, and the rhythm guitar part is no exception. I've heard an excellent rhythm guitar part make the song, and a bad rhythm guitar part kill the momentum and really make the song less interesting. So lets dive into some rhythm techniques and get your creative juices flowing!

Ultimately Rhythm Surf Guitar techniques can be broken down into 3 different main styles:

Obviously there are many other compositional rhythm guitar techniques that have been employed to some degree in some songs, however these three seem to be the mainstay techniques employed by the musicians in the first wave of surf music. Lets dive deeper into these three styles and explore their potential origins, as well as some of the masters who played them best.

The first instance of this style in first wave surf is the Belairs "Mr. Moto" right after the intro when the guitar plays eighth notes on the D-A before starting the main melody. This was played by the lead guitar, but joined by the rhythm guitar as well. Since Mr. Moto is one of the very first songs considered Surf Music, this is what makes it the first instance of this style. However the most famous song of the first wave to employ this style is definitely "Pipeline" by the Chantay's.

It is quite easy to see how this could have been inspired by Mr. Moto, as instead of going back and forth between the two notes, a third note was added, making this an instance of a type of broken arpeggiation also known as the "Alberti Bass".

Another very successful variation of this is the song "Penetration" by the Pyramids, which is even more similar to Mr Moto except that it is played on the F# chord so that it switches between the F# and the E in the bottom note in the same broken arpeggiation style as Pipeline.

This type of Rhythmic device is used extensively throughout the Surf Music genre and could possibly be inspired by such early acts as Johnny and the Hurricanes with Thunderbolt. In my opinion this style of "Palm Muted Repeating Rhythm" is directly inspired from the Blues and Rockabilly players that came long before. I only include this in the Palm Muted section because to me there is a direct lineage from this style of rhythm guitar, used extensively in Rockabilly songs, to the much more inventive and lyrical palm muted style used in such songs as "Intertia" by the Hustlers.

Full Chord Rhythmic Strumming is probably the most common style of Rhythm guitar, not only in the Surf world, but also in a lot of other styles of music where guitar is played in a rhythm capacity. It's just too easy to pick up a guitar and play rhythm by strumming the root chords in some sort of rhythmic fashion. But Surf Music put it's individual character behind this style as well with some very technically challenging rhythms and techniques (along with some very boring and rhythmically challenged performances as well!).

The Ventures really started out the sound with the full chord intro to "Walk Don't Run" which all of the Surf Teens loved back then. And while Ventures weren't necessarily considered Surf, they undoubtedly inspired every Surf musician at that time with this song in particular. So who else to do it better and maybe best, but Eddie and the Showmen!


The rhythm guitarist in this song is most probably Rob Edwards, who was considered Eddie's right hand man. Eddie and the Showmen are considered one of the finest first wave Surf groups and if you listen to Rob's rhythm part you can see why! He's no slouch! He starts off with a simple 8th note repeating pattern and then builds it into 16th notes with full chord strumming, which really accentuates the rapid speed picking that Eddie is doing in the lead and builds the songs momentum right alongside Eddie's guitar playing. This technique really works to build the excitement of the song for the listener and  is no easy feat to pull off on rhythm guitar either!


In this awesome song from Australia's premiere first wave group the Atlantics, the Rhythm guitar part is being played by Theo Penglis. This is a perfect example of the full chord "Gallop" strumming that evolved a good deal from the acoustic wizardry of Bruce Welch of the Shadows fame, and his almost flamenco style that he brought to their music.

This can be an intensely tiring rhythm guitar technique as it does not stop or even slow down the entire song in a lot of cases. However it gives the song a ton of motion and once again accentuates the 16th beats of the rhythm adding dynamic and excitement to the song.

At the same time the Belairs were championing the Palm Muted Rhythm technique with their super-early surf release "Mr. Moto, Dick Dale was releasing a competing rhythm technique that would have lasting affect on the young surfer crowd with his song "Miserlou".

The Rhythm technique used in this song is all about raw power and the beat. It's super simple and easy to do, and gives the song a very forceful and choppy nature that enhances the underlying groove.

Go Forth and Prosper

Well I hope the next time you pick up the guitar and get forcefully made to play the rhythm part (this is the only way this happens), just remember you have a wide palate of things to choose from. And don't stop getting creative, some of the best rhythm parts don't fit perfectly into these categories. To close I'll play you one of my favorite rhythm parts that seems to dance all over these different areas with ease and makes the band sound like a symphony. From none other than Laika and the Cosmonauts! Enjoy Surf Listeners, and don't forget to stay tuned to the Southern Surf Radio for a broadcast coming up soon!


Special thanks to Ivan Pongracic for helping me out with this post! Also here are some really great posts about playing rhythm guitar on www.surfguitar101.com: 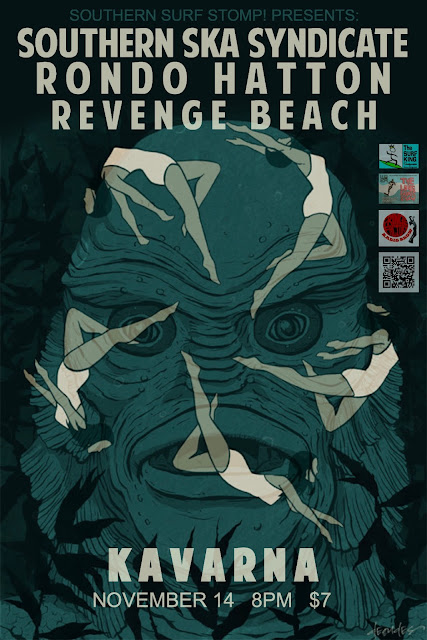 Athens, Georgia seems to have been churning out great surf and instro groups as of late.  Although I've only had exposure to one tune, Revenge Beach seems to be no exception.  Thunderous drums drive a refreshing modern take on the classic surf formula.  I believe members of the band formerly to be in another Athens combo, The Curl, and I'd like to thank Richard of The Mystery Men? for bringing these guys to my attention.

Rondo Hatton is one of the few surf bands to come out of Louisiana, and the only from Baton Rouge as far as I can tell.  Not unlike Los Straitjackets, I'd categorize them more in the instro camp, drawing from a vast array of influences from pre-surf instrumentals (a la The Ventures, Fireballs, Santo & Johnny), blues, Tex-Mex, Spaghetti Western, and of course classic surf rock.  The group regularly releases albums of mostly original material, with excellent compositions, production, and striking album art.

November's Stomp will be the official debut of the Southern Ska Syndicate.  The nine piece(!) band is a super group of sorts, comprising members from several acts with which our readers might be familiar like The Penetrators, The Mystery Men?, El Capitan and the Band With No Name, and Gemini XIII, along with several members of the legendary Atlanta ska group The Robustos.  They'll be performing many of the ska, reggae, and rocksteady classics.
Posted by Chad Shivers at 3:57 PM No comments:

Episode 14 features spooky Southern surf hits as well as an interview with Noah Holt of The KBK (formerly Kill, Baby...Kill!).

Intro and outro music, "Southern Surf Syndicate Theme", provided by The Penetrators.
Posted by Chad Shivers at 5:38 PM No comments: