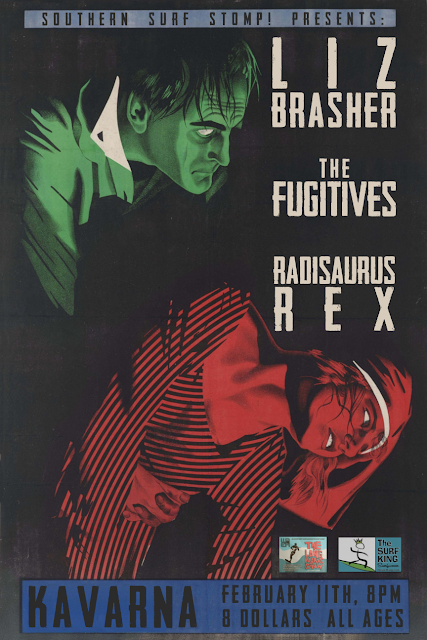 We're changing it up this go around with just one instro/surf group, The Fugitives (featuring Nicole of The Wave Slaves), and two surf-leaning turf groups.  Liz Brasher is an artist which deserves your attention.  Now normally singer-songwriter is a term that turns me right off but Liz is different, channeling 60's RnB fused with guitar awash in reverb and backed by a phenomenal combo.  The Fugitives are back with guest drummer Nicole Edge of The Wave Slaves.  The trio will be doing mostly standards in their aggressive style with David Northrip's sped-up-tape guitar playing.  Rounding out the bill are surfy, garage punkers Rad-isaurus Rex who did a show for us at the Star Bar a while back and are just a ton of fun.

Facebook event page
Posted by Chad Shivers at 9:47 AM No comments: