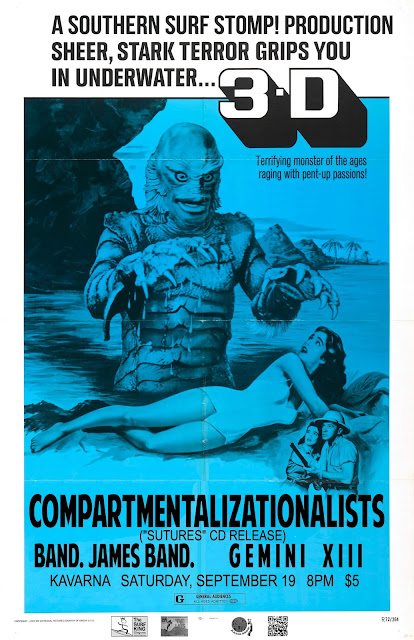 The Compartmentalizationalists is the moniker for multi-instrumentalist Jeffrey Bützer's guitar based trio.  In this group, Bützer channels his inner Sonny Sharrock, Thurston Moore, and Starcrunch to create noisy, reverb laden instrumentals.  Not only will this show serve as the official Southern Surf StompFest! after party, but the band will be taking the opportunity to release their debut album, "Sutures", as well.

Gemini XIII have been on a bit of a hiatus recently as they've been working through some personnel changes, but I'm happy to announce that they will be debuting their new lineup at September's Southern Surf Stomp!  If ever there were an underrated surf group in Atlanta, it would surely be these guys.  The quartet writes some truly great music and their live shows have escalated exponentially since the band's inception.  Having been a huge support to the Stomp and the local surf community in general, I'm excited to see what future missions they have in store.

"You expect me to talk?  No, Mr. Bond.  I expect you to...surf!".  Rounding out the evening will be the declassification of top secret tones from Band. James Band., Atlanta's own James Bond themed tribute act.  You can expect to hear your favorite Bond themes, as well as other spy themes and many more surprises.

We're also glad to have our resident DJs, The Fringe Factory, back with us for this event.  They'll be spinning the best surf, garage, rockabilly, and golden era rock 'n' roll.
Posted by Chad Shivers at 6:59 AM