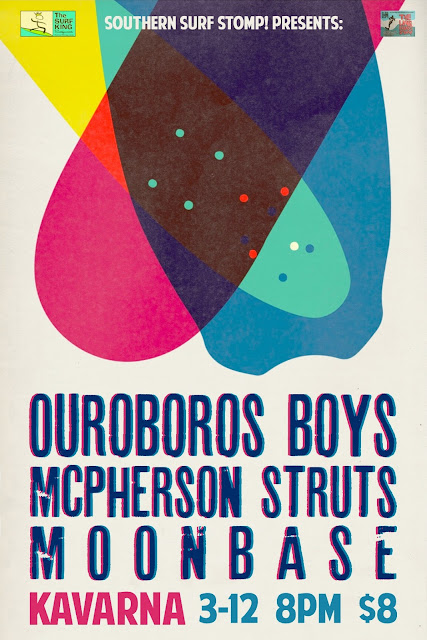 Much like February's Stomp, we have another StompFest favorite returning on March 13th.  Asheville's Ouroboros Boys are bringing their mandolin lead, classic surf sound with a bit of a dreamy vibe to Kavarna.  Having recently release their first official 7" single and music video, these guys are going to be hitting the pavement hard this year and we're proud they've chosen to make Atlanta one of their stops.

Speaking of hitting the pavement, not many bands do it harder than Alabama's McPherson Struts.  The trio is a well oiled rock 'n' roll machine performing loud and gritty music infused with country, punk, rockabilly, metal, and much more.  Their leader is the lovable Buck McPherson, who sings and plays the drums whilst standing.

Atlanta's number one progressive surf instrumental combo MOONBASE will be returning to the Stomp for the first time since the release of their debut record "Creation Myths" in August of 2014, their first show since September.
Posted by Chad Shivers at 3:30 PM