Storm Surge of Reverb review of Impala "In The Late Hours" 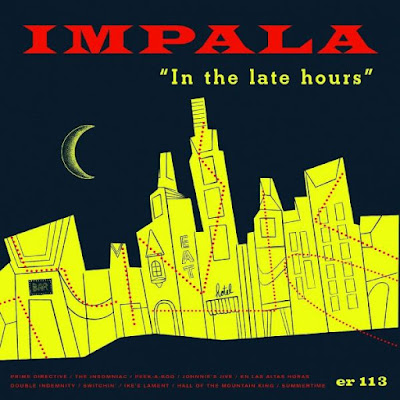 by Hunter King
originally published on Storm Surge of Reverb

Who would have thought that after 20 years of silence we’d see seminal instro acts of the 90s like Impala and The Bomboras rise from the grave? While I think surf is having a great year right now, it’s slowly changed since the 90’s, probably a little less traditional, or at least allowed a lot more instrumental music styles under its umbrella.

Perhaps that’s exactly why Impala is back. In the Late Hours is not a surf record. While it feels comfortably at home with their back catalog, these aren’t adrenaline-focused, driving guitars. Instead it’s moody, cinematic, sultry and surly -- trenchcoat-wearin’ gumshoe sorta stuff. A decent helping of crime jazz and some dynamite saxophone. “Double Indemnity” is much closer to Henry Mancini and orchestral soundtrack music than anything on a surf record. It’s not always so serious though, with some Las Vegas Grind material here and there (big fan of “Johnnie’s Jive”), an Ike Turner tribute, and a cover of In the Hall of the Mountain King.

Impala’s albums have never been lacking in sound quality and this is no different. As usual, they prove that they know how to make a saxophone sound as beautiful as it ought to, and the occasional other brass instrumentation sounds great, like a true soundtrack.

Impala aren’t the only 90’s act to make a comeback album, but unlike some of the others this that have done so, this feels like a matured version of their former selves rather than confused one.

You can grab CD or vinyl copies of the album from their PledgeMusic page. And I’d like to suggest driving South on I-55 for about 6 hours when they get a chance.